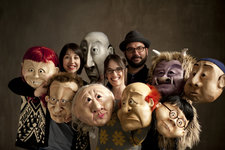 WONDERHEADS is a multi-award winning physical theatre company specializing in mask performance and visual storytelling. Their work is performed in full-face mask, a wordless, whimsical form rarely seen on North American stages, and has been described as “Utter magic” (CBC), “Powerful, surprising and moving” (The Globe and Mail), and “Fantastic, in every sense of the word” (Cincinnati Enquirer). In this distinct style of storytelling, WONDERHEADS make it their business to step beyond words and ignite the hearts and imaginations of every audience member.

The co-founding ‘heads’ of WONDERHEADS are Kate Braidwood and Andrew Phoenix, who came together in 2009 resolved to do their part in conjuring a little magic and wonder into the world. Armed with their respective careers in the professional theatre and a shared background in the most curious of MFA degrees (Ensemble Based Physical Theatre, Dell’Arte International), they set out to create their first show, 'Grim and Fischer,' the story of a feisty grandmother who battles it out with the Grim Reaper himself. The popular success of this show served as a launchpad for the company and over the past decade they have developed five productions: 'Grim and Fischer,' 'LOON,' 'The Middle of Everywhere,' 'The Wilds' and 'A WONDERHEADS Christmas Carol' which they have toured extensively to festivals and performing arts centres throughout Canada and the United States, from Alaska to Hawaii, Newfoundland to Victoria. Their work has consistently garnered rave reviews and been honoured with accolades such as twelve Best of Fest awards, five Critics’ Choice Awards, and in 2013 the company was named one of ten Scion Motivate finalists, a US national contest recognizing entrepreneurs in the creative arts.

The WONDERHEADS also frequently engage in a variety of outreach and teaching activities in the communities they visit, including workshops, in-depth residencies, lecture demonstrations and master classes. They consider themselves a ‘Can-American’ ensemble, with one founding member from Canada and the other from the United States. When not the road, the WONDERHEADS call Victoria, BC home.