Swiss classical guitarist, Johan Smith, is a highly acclaimed, illustrious musician, bringing virtuosic interpretations to his instrument. Winner of the prestigious Guitar Foundation of America (GFA) competition in 2019 and defined as the "Classical Guitar Revelation 2017" by the notable French magazine "Guitar Classical Magazine", Johan Smith has become one of the most prominent names in the world of classical guitar. He has been invited to perform in renowned festivals, is a highly in-demand concert soloist, and has performed with orchestras such as the Budapest Symphony Orchestra, the Lausanne Chamber Orchestra and the Versoix Chamber Orchestra. He is currently preparing the recording of his second album with Naxos, as well as tours that will bring him to perform in China, the United States, Canada, and at the famous Carnegie Hall in New York.

Playing at the highest level, Johan Smith has won some of the most competitive and distinguished guitar competitions in the world. As a result of his 2019 win of classical guitar’s most venerable competition, Guitar Foundation of America (GFA), Johan has recorded his first solo album with the Naxos Label (2020); He was a featured soloist in the virtual June 2020 GFA conference, and will begin a nine- month tour from September 2021 throughout June 2022, presenting solo concerts, conducting masterclasses and outreach activities in over 50 cities across the United States and Canada. Johan is recording his second album with the Naxos Label as part of winning 1st place in the Changsha International Guitar Competition in 2019, and, will also be embarking on a 6-city tour throughout China (Hangzhou, Chengdu, Kunming, Yueyang, Xi’an, Changsha).

Johan’s particular interest in contemporary music has led him to collaborate with several composers, including Josquin Schwizgebel and Arnaud Fillion, who dedicated his "Concerto for Guitar and Orchestra" to Johan. His affiliation with Arnaud Fillion bestowed an opportunity to record the Fillion’s three-movement concerto with the Budapest Symphony Orchestra in October 2019, released in February 2020.

Notable career highlights include Johan’s collaboration with the Lausanne Chamber Orchestra at the BCV Concert Hall in Switzerland in May 2019, performing the one of the most prestigious classical guitar concertos, Joaquín Rodrigo’s “Concerto de Aranjuez”. Johan also was a featured soloist at the 9th (2017) and 11th (2019) annual International Guitar Festival of Versoix, Switzerland, playing with the Chamber Orchestra of Versoix at the festival October 2017, and was invited back to perform a solo recital in November 2019.

Born in 1990 in Geneva, Johan obtained a Bachelor in 2015 and a "Master of Arts in Instrumental Pedagogy" in 2017 at the University of Music of Lausanne, in the class of Dagoberto Linhares. In addition to teaching guitar at the Conservatory of Morges, he also obtained the most important academic title in the field of musical performance in Switzerland: the "Master of Arts specializing in Music Performance Soloist"(2019), awarded by the highest grade.

In a completely different approach, he is the founder, composer, performer and graphic designer in the extreme metal band "Stortregn", with whom he has already recorded four albums and played in three continents since 2005.
Johan is an endorsee of Savarez guitar strings, one of the world’s leading string manufacturers (founded in 1770).

For more information and ticket access please go to: www.victoriaguitarsociety.ca 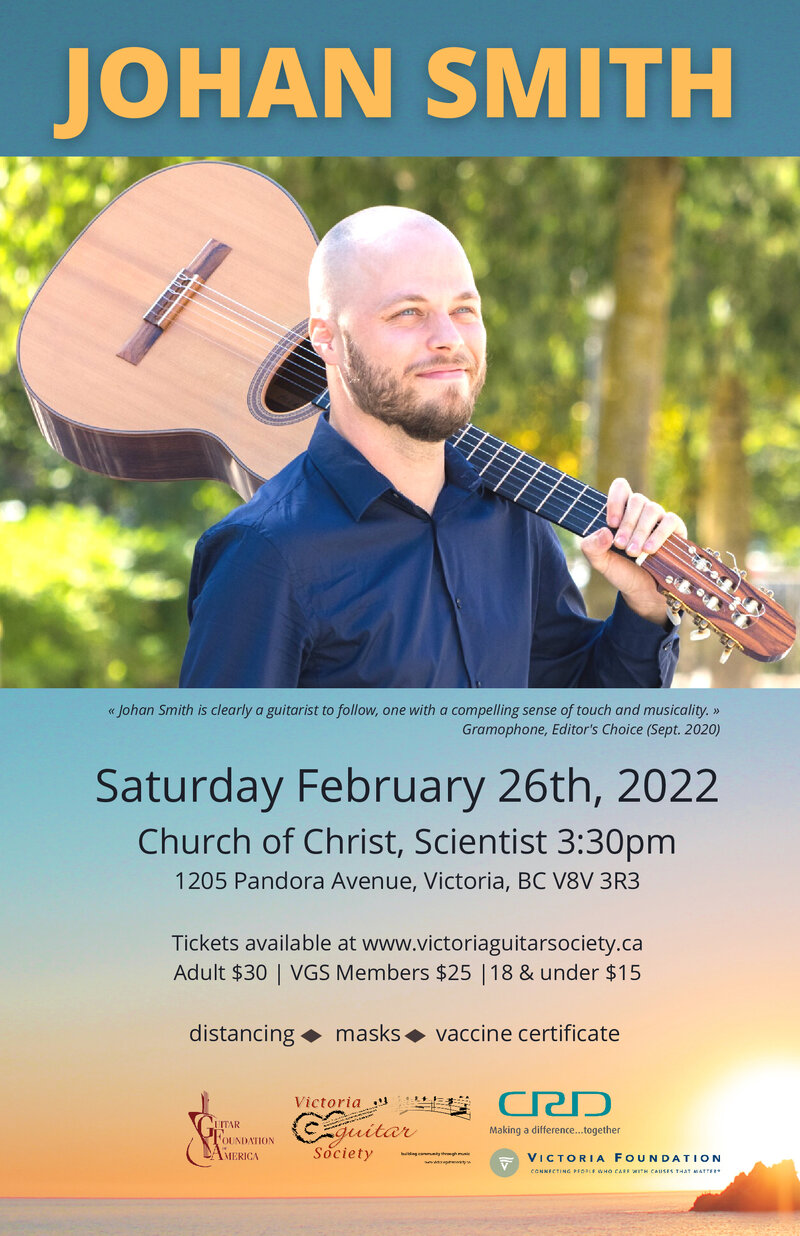