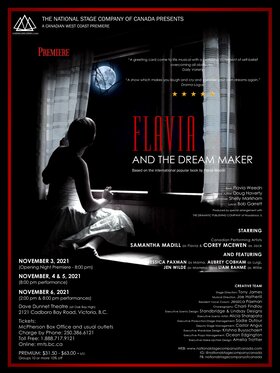 Flavia and the Dream Maker:

Theatre: Musical
Under the creative direction of the National Stage Company of Canada comes a Vancouver Island musical premiere starring one of the countries most exciting rising young stars, SAMANTHA MADILL.

Based on the internationally popular book (a true story) by artist/poet Flavia Weedn, Flavia and the Dream Maker is a story of family, coming of age, the importance of dreaming and—ultimately—love.

The musical explores the world of a small, loving family during World War II. Due to financial hardships, 12-year-old Flavia, her younger brother and mother are forced to relocate and move in with Flavia's grandmother near south central Los Angeles. When Flavia meets her first dream maker, "Uncle Jack." He teaches her to dream, imagine and appreciate the beauty of the unique qualities each person is given. Jack's dream, however, is to fly a plane and serve, his country. His departure is met with mixed emotions, and the temporary (and eventual permanent) loss to the family is met with unselfish love and strength.

The company welcomes you to join them this November at the beautiful Dave Dunnet Theatre for a truly memorable production featuring some of the city's most versatile and dynamic performing artists.