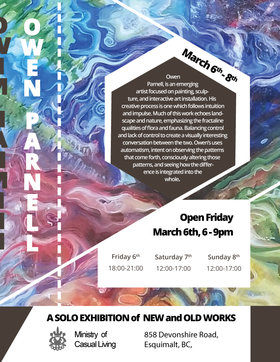 Owen Parnell, is an emerging artist focused on painting, sculpture, and community engaging interactive art installations. His creative process is one which follows intuition and impulse. It is influenced heavily by his surroundings, inner state, and initial vision. Much of this work echoes landscapes and nature, emphasizing the fractaline qualities of flora and fauna. Balancing control and lack of control to create a visually interesting conversation between the two. Comparable to surrealists using automatism for introspection, Owen’s use of automatism is intent on speculating universal truths. His work is informed largely by his spiritual practice, his admiration of nature and geometry.

In sculpture Owen contrasts precise geometries, reminiscent of R. Buckminster Fuller, with rough edges and loose ends. His painting on the other hand, is inspired largely by visionary artists such as Alex Grey, M.C. Escher and Wassily Kandinski. Containing flowing transitions between abstract geometric forms and representations of the microcosm, the macrocosm, and the in-between.

Owen views Drawing and Painting as a powerful tool for creative expression and expansion, and is excited to share with those who are open and willing to spectate or participate. His passion to provide openings and outlets for the creative expression of others is rooted in his belief that creative engagement can instigate healing in individuals, as well as in communities. This is actualized through Owen’s facilitation of interactive art installations and events. These installations are made to be intriguing and approachable to passersby regardless of their familiarity with the mediums, making connections between participants, while building community, and reuniting people with their creativity. Owen has also been active in this area through volunteering as a workshop assistant for school art programs, and working as an education assistant in visual art.

Owen finds inspiration from sacred art traditions, and art that serves a cultural and spiritual purpose rather than being something that is by experienced only on a visual and conceptual level. Though raised far from their traditional territories, Owen is of Neihiyo (Cree) ancestry, and a member of the Metis Nation of British Columbia. For several years he apprenticed with the late Coast Salish carver Curtis Christie. Owen has been part of a number of different Indigenous Art Projects, including artist run centre exhibitions, private, and city-commissioned murals.

In the past few years after graduating from Camosun College’s Visual Arts Program, Owen acquired his acupuncture license, got married and became a father. He is now working to establishing his art and acupuncture careers.

The Ministry of Casual Living wants to acknowledge the CRD Arts Commission through the CRD Arts & Culture Support Service for their generous support of our programming season.
@feedthearts #crdarts #yyjarts
https://www.crd.bc.ca/service/arts-funding
http://ministryofcasualliving.ca/