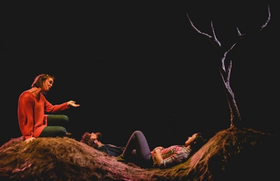 Six actors portray over 30 real-life Yukon characters who throughout the play share their stories of colonialism, natural resource extraction, racial discrimination and a deep love of the wild. The interactions of these characters evolve around relationships between indigenous people and settlers, the growing immigrant population, and the fast-paced changes Canada’s north is experiencing.

Open Pit Theatre spent 3 years developing Busted Up: A Yukon Story as part of The Yukon Verbatim Project, which consisted of gathering over 60 interviews from eight Yukon communities including Whitehorse. The words you will hear are the exact words as transcribed during the interviews without any alterations or additions. Each of the real-life characters featured in the play was consulted, invited to readings/shows, and ultimately gifted Open Pit Theatre the use of their words for this play.