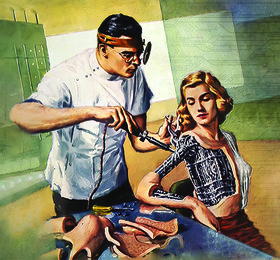 Theatre: Comedy
Considered one of the funniest and most inventive plays by Britain’s grandmaster of comedy, this romantic sci-fi satire is set in the foreseeable future, when actors are replaced with convincingly lifelike robots known as “actoids.” When an aspiring young writer visits a TV studio, he discovers the charming android Jacie Tripplethree (serial number JCF 31333) and realizes that the programming glitch that makes her laugh hysterically also makes her more human. Will he lose his heart to a robot? Tune in to find out! In the age of today’s virtual online assistants, this wickedly funny satire reads like a cautionary tale of the rise of artificial intelligence.