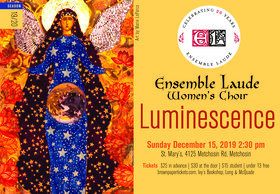 Music: Classical, Folk / Celtic / Latin / World
Join us on a magical journey through light and beauty, with songs to celebrate the magic and glimmer of winter. Victoria's premier women's choir brings light into the darkness this Christmas season with Luminescence.

Join us to hear sparkling pieces such as Rise Up by Jake Runested, Reel a Bouche by Malcolm Daglish, a Finnish set by Anna-Mari Karaha, and Eatenen Vuelie by Frode Fjellheim. We will also premier two new commissions both by Canadian composers: Dans ton coeur dort un clair de lune Robert Ingari and Let Us Carry You by Sarah Quartel and Laude singer and soloist Kristia di Gregorio. Let us enchant you with the sweeping harmonies of Northern Lights by Ola Gjeilo, Maria durch ein Dornwald ging arranged by Douglas Hensley and Koik Muutub Lauluks by Part Uusberg.

Ensemble Laude, directed by Elizabeth MacIsaac, is an award winning women's choir founded in 1998. They enchant their audience with a creative blend of medieval repertoire and contemporary choral works from around the world. In 2015 they won Second Place in the national CBC choral competition and in 2016 represented Canada at the international Cho... more info
Articles: Illuminations: Songs Towards the Light
Videos: