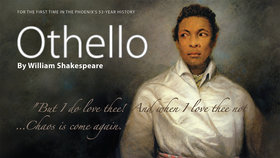 Theatre: Drama
With its disturbing portrait of a world infused with racial politics, misogynist social structures and backstabbing treachery, Shakespeare’s Othello feels like it’s been ripped from today’s headlines – not written over 400 years ago.

Two lovers come from very different worlds: Othello, a mighty General from a foreign land, and Desdemona, a beautiful Senator’s daughter. They marry, undeterred by the prejudices that surround them. But no sooner are their vows sealed than their love is put to the test, as bigotry, envy, and jealousy begin to pull them apart.

Playing on Othello’s insecurities as an outsider in a predominantly white society, the charming but envious Iago – an ensign and trusted advisor – stokes the flames of his commanding officer’s jealous nature, bringing both the lovers, and the world they live in, to the point of utter collapse. In its raw emotions and ruthless politics, Othello remains an ageless and poignant tragedy.