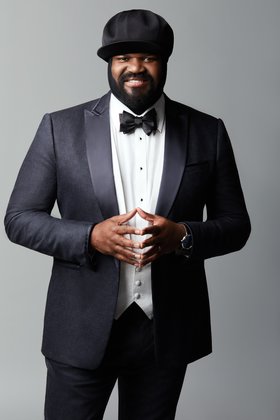 Music: Funk / R&B, Jazz / Blues
Following three sensational sold-out performances at the Royal Albert Hall, international best-selling artist Gregory Porter released his first ever live album, One Night Only – Live At The Royal Albert Hall on November 2018. Porter has achieved international recognition with his two Grammy Award winning records for “Best Jazz Vocal Album”, Liquid Spirit in 2014 and Take Me To The Alley in 2017, which became the first jazz album to hit the Top 5 on the Official UK Albums Chart for over a decade. Liquid Spirit took Porter from being the biggest name on the jazz scene to being one of the most sought-after singers around today, performing sold-out shows across the UK and being invited to perform on high profile TV programmes including Strictly Come Dancing, the BBC Music Awards, and The Graham Norton Show. 2018 was yet another landmark year for Porter after his 2017 album, Nat King Cole & Me, hit number three on the Official UK Album Chart and received a 2019 Grammy nomination. Porter has performed at many major music festivals, including Glastonbury, where he shared the Pyramid Stage alongside the likes of Muse, Adele and Coldplay. With his rich and soulful voice, Porter wins audiences with the rare combination of raw talent and the musical sophistication that he captures so effortlessly.