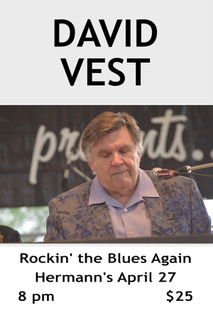 Music: Jazz / Blues
Having won his 5th Maple Blues Award for Piano Player of the Year, David got right back to basics with a bang, playing the good rockin’ music that made him a blues legend. Like his sold-out show in March, this one will feature classic piano blues and boogie-woogie, Vest originals, and a surprise or two. In other words, different songs for the most part, but the same roadhouse vibe.

It’s a sound, a groove and a feeling that’s hard to find these days, timeless but by no means dated. As Chuck Berry said, “it’s got a backbeat, you can’t lose it, any old time you use it.”

David’s band includes Tom Bowler (guitar), Ryan Tandy (bass), and Damian Graham (drums), and they are equal to the task of following David wherever the spirit leads him.

David Vest is a singer, songwriter, piano player and storyteller. He was born in Alabama but settled in Canada about fifteen years ago, after an amazing career dating back to 1957. Over the years he has appeared onstage with Big Joe Turner, Floyd Dixon, Lavelle White, Bill Black’s Combo, Fannie Flagg and many others. Besides winning the Maple Blues Award five times in the past seven years, he has also been nominated for Songwriter of the Year and (twice) for Record of the Year. His songs have been covered by artists ranging from Tammy Wynette to Downchild, and he has appeared as a guest artist on several albums. David was Raoul Bhaneja’s guest for performances of the play “Life, Death and the Blues” in five different cities. He tours widely and has appeared as a main stage headliner at numerous music festivals.

This summer David and his band will be among the headliners at the Calgary International Blues Festival. David will also be on the bill (along with Snoop Dogg and the Backstreet Boys) at the Ottawa Blues Fest.

David Vest is a five-time Maple Blues Award winner. He is an authentic, Southern-bred boogie-woogie piano pounder and a world-class entertainer, and his live shows are the stuff of legend. He backed Big Joe Turner in the '60s, toured with Jimmy T99 Nelson, Floyd Dixon and Lavelle White, and was co-leader of the legendary Paul deLay Band, sharing... more info