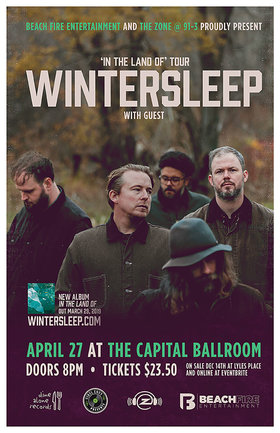 “The average Canadian carries around with them in their head a vision of spaciousness.” So theorized Canadian composer R. Murray Schafer, describing a so-called ‘Canadian sound.’ For Schafer and many others, it was a sound defined by space, by the land and our distance from and proximity to it. For Harry Freedman, it was “gaunt” and “lonely.” Elaine Keillor called it “immense, empty, mysterious, harsh, indifferent, producing a response of awe mingled with terror and an intense sense of spiritual loneliness.”

On Wintersleep’s seventh full-length record, In the Land Of, this geography is both real and imagined. It is understood that our surroundings are not, in fact, essential or concrete elements; they’re constructed in relation to us, the inhabitants. Our identities, too, are constructed in relation to the land. The land, both physical and figurative, changes, and so do we. Familiar land. Foreign land. Inhospitable land. Unceded land. Stolen land. Dead land.

This might be why In the Land Of doesn’t inhabit one terrain, but many. It might also be why none of these terrains feel comfortable. “I don’t really feel 100% at home anywhere,” says vocalist and guitarist Paul Murphy. “Over time, that’s something that weighs a lot on me, not feeling really connected to my environment.”

Like all Wintersleep records, In the Land Of encourages thought and introspection. The new record’s title is an incomplete thought, a blank that is filled in across the record with different places, words, and sounds. “A lot of the songs touch on this idea of being a stranger or feeling foreign in all the different landscapes in which the songs took place lyrically,” explains Murphy. “It all relates back to the land,” adds guitarist Tim D’Eon.

The record follows 2016’s The Great Detachment, which saw lead single “Amerika” spend 11 consecutive weeks atop Canada’s rock radio charts. In the Land Of was recorded between Bath, Ontario’s Bathouse Recording Studio and Toronto’s Revolution Recording, with Scottish producer and longtime collaborator Tony Doogan (Mogwai, Belle and Sebastian) back at the helm. The record’s cover features an image captured by photographer Richard Carey. It’s an underwater shot of garbage and debris floating just below the surface, with errant strands of lime-green seaweed stretching into the frame. Yet another fragment of ‘land:’ “It’s still a product of land-dwellers,” says drummer Loel Campbell of the image. “It’s a reference to our current failures as a planet, as a society.”

These themes are pressed across the record’s 10 tracks, beginning with the somber, misty waltz of “Surrender.” Tim D’Eon’s guitar, pushing through dark, rippling triplets that patiently ascend and descend, heralds a record that is in no rush: it is purposeful and spacious. Murphy’s voice enters the fray: “36 years young/Halfway to my tomb,” he intones. Steadily and surely, Campbell’s drums creep in with gentle snare and kick, along with Chris Bell’s bass. These elements coalesce, quiet at first before exploding in a magnificent, cinematic crescendo as Murphy howls, “I surrender to you!”

Murphy explains that it’s a love song, wrapped up in the relinquishing of control over one’s feelings. It introduces a strain of anti-heroism and fatalism that is present through the record, one that is on some level wrought with existential worry. Campbell explains it as “the struggle that lots of people go through: of meaning, purpose. Are you happy? Are you doing the right things for yourself?”

The second track, “Forest Fire,” is similar in its approach to love: Murphy describes a powerful natural phenomenon, all-consuming. “You were a forest fire burning effervescent through the night,” he sings over driving, Boxer-era National piano chording. The song finds a subject at the mercy of his surroundings. It’s a repositioning of humankind’s relationship with land—so often dictated by a capitalistic need for control and power—wherein we are not the controllers, but the controlled. “Not having control of something is not necessarily a bad feeling,” emphasizes Murphy. “It’s kind of liberating.”

Then arrives “Beneficiary,” a throbbing disco-noir romp that details the modern relationship between whiteness and genocide of Indigenous peoples. “Drive to work all day, try to sleep at night/Beneficiary of a genocide,” Murphy sings. The lyrics borrow from Australian writer Peter Carey, who in an interview last year asserted, “You wake up in the morning and you are the beneficiary of a genocide.” “As a Canadian, I feel a real connection to that sentiment,” says Murphy. “It really encapsulates the idea of someone historically removed from these atrocities but who nonetheless benefits, and has to come to terms with and find ways to acknowledge and take on a certain responsibility in making it right.”

The song, packaged under an ABBA-ish pop veneer that’s been charred and bruised (Campbell set the song to the tempo of “Dancing Queen”), details the continuing dynamic of settler-colonial violence. “I’m a history of violence/I’m a war never ending,” Murphy pines on the verses. It is a critical recentering of popular discussions of Indigenous issues, which typically focus on past evils. Here, these violences are located in the present, still unspooling—and the song reminds us that as settlers on unceded land acquired through genocide, we all share responsibility for this legacy. “You’ve not literally done something, but it doesn’t mean that you’re not benefitting from a wrong,” explains Murphy.

The record’s multitudes, like the taut, punkish velocity of “Lighthouse” or the darkened indie pop hum of “Waves,” play counterbalance to the folksy, rollicking Doomsday-cheer of “Never Let You Go” and stomping, rosy guitar rocker “Into The Shape Of Your Heart.” “Terror,” with soaring, organ-backed chorus theatrics, was inspired by a British artist’s rendering of regions that were targeted by drone strikes—a maddening statement on imperialist violence and its attendant disregard for foreign land and lives.

The record closes on “Free Pour,” an almost-scrapped, melancholy but breezy journey through a birthday on “the shy side of 40.” “After a certain year, you don’t get birthdays anymore,” Murphy chuckles. “The joy gets taken away from them. I relate to that.” The lyrics were penned around Murphy’s 37th birthday, and detail “going out to celebrate your birthday by yourself, and thinking about the most miserable scenario in which that can happen.” He describes the song as “taking the piss out of myself,” but for all its comedic trappings (“Baby, I’m on the shy side of 40/Still writing riffs like nobody’s business except in my case it most certainly is/I’m a professional riff writer”), it still bears a profound truth. For Murphy, that’s “finding something liberating about passing these milestones; finding something that’s liberating about letting it all fall away.”

It’s the direct result of feeling like a stranger somewhere, of feeling alienation so intense it must be dissolved before it constricts. In the Land Of is about that alienation: from the self, from others, from the world around us. These are all lands we occupy, ones which we must know and explore and surrender ourselves to. Keillor’s “spiritual loneliness” was not, after all, a product purely of the self. It came from how we exist here; it came from the land.

Wintersleep hail from Halifax (Nova Scotia, Canada). The band's first show was April 2002. First CD released in April 2003, the second in February 2005, adnd the third October 2007. The latter album, Welcome To The Night Sky was also realeased in America, Japan and Europe. more info
Submit info on this show to our admins