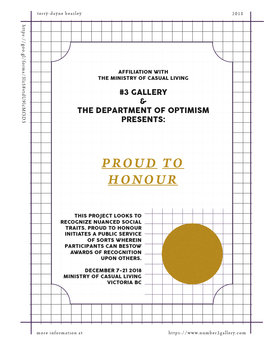 Receiving an award at a young age from a local sect of the Optimism International prompted Terry-Dayne Beasley’s interest in social recognition of nuanced character traits. Beasley considers how identity relates to the history of symbolic reward systems, as well as the positive affect that occurs when the inadvertent display of such traits are awarded.

Using the Ministry of Casual Living as institution through which awards will be issued, Proud To Honour initiates a public service of sorts wherein participants can bestow awards of recognition upon others. Prior to and for the final instalment of the exhibition, Beasley relies on the public to facilitate both the granting process and to provide the necessary information to generate such awards.

Terry-Dayne Beasley is a Vancouver based artist working primarily in image making and performative sculpture with a strong interest in collaboration as a means of resolving conceptual inquiry. Terry-Dayne utilizes sculpture to illustrate how humans adapt to their surroundings and one another. Terry-Dayne completed his BFA at Emily Carr University of Art and Design in 2017.

On Friday, December 7, 2018 we are also hosting an open studio and fundraising event in conjunction with the Terry-Dayne Beasley 'Proud To Honour' project. Come out and support your local artist-run centres and view the work of the current studio artists at 858 Devonshire Road in the Esquimalt Industrial Park.