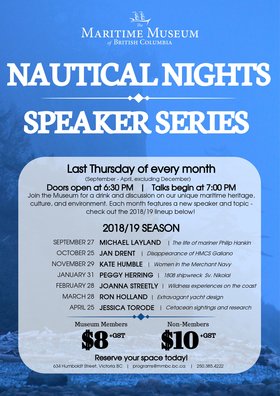 Cultural / Heritage:
Join the museum on the last Thursday of each month for a drink and discussion on our unique maritime heritage, culture, and environment! This month’s topic is Women in the Merchant Navy:

Canada’s Merchant Navy was utterly integral to Allied success during the Second World War. Most famous for their trials in carrying supplies from North America to Great Britain through the icy waters of the Atlantic, beset by German submarines (Unterseebooten) at every turn, the Merchant Navy was technically not a branch of the Armed Forces though it was directed by the Royal Canadian Navy, and normally escorted by them and the Royal Canadian Air Force. Enemy forces had, however, correctly identified just how important their regular deliveries of food, ammunition, weaponry and raw material were to the survival of Great Britain, and subjected the ships of the Merchant Navy to such intense attack that approximately 1 in 8 of their members were lost due to enemy attack- a higher casualty rate than befell members of the three branches of the Armed Forces. Of the 12,000 Canadian merchant marines, 1,500 never came home, and of them 8 were women.

Women performed vital roles in the Merchant Navy, from wireless operators, to cooks, to stewardesses, to administrators. Many of them were young, fresh out of school, and ready to serve their country. The shipbuilding industry that boomed in Canada as the result of a dire need for more merchant vessels also employed large numbers of women, helping to redefine gender roles across the nation. This month’s Nautical Nights will explore Canada’s Merchant Navy, the roles played by the women within it, and individual tales of bravery, sacrifice, and service.

ABOUT THE SPEAKER: Kate Humble is an historian and the Curator for Fort Rodd Hill and Fisgard Lighthouse National Historic Sites. She completed her graduate work at the University of Toronto and taught there before turning to the world of museums. After several years with the National Collection of Arms and Armour (Royal Armouries Museum) in the UK, Kate returned to her hometown of Victoria, and held posts as the Education Curator at the Maritime Museum of BC and as the Operations Manager of Craigdarroch Castle, before taking up her current position with Parks Canada. Although a medievalist and military historian by training, she has a particular affection for the unusual characters and storylines which animate the history of Victoria, and can be found delivering historic walking tours of the city with Discover the Past, with her own characteristic, entertaining brand of storytelling.