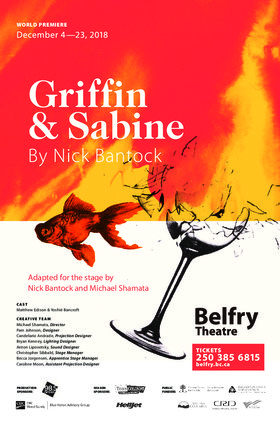 Theatre:
Griffin & Sabine is the story of two souls seeking the courage and the means to unite.

Griffin Moss is a lonely artist in London, who makes postcards for a living. His life is changed forever when he receives a cryptic postcard from Sabine Strohem, a woman he has never met. She is an artist who illustrates postage stamps, and lives in the South Pacific. The two begin “An Extraordinary Correspondence.”

Combining elements of romance, mythology, modern philosophy, and Jungian psychology, Griffin & Sabine is the story of two souls seeking the courage and the means to unite.

WHY I CHOSE THIS PLAY
The remarkable Nick Bantock lives in our community, and his enchanting story – together with his breathtaking artwork – were a part of my history. The chance to put these characters and images onstage is delicious and irresistible. —MS