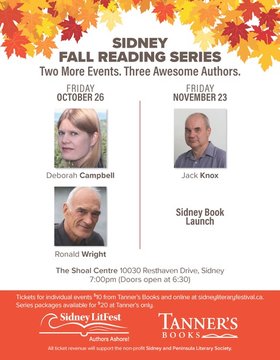 Literary:
An Evening with Deborah Campbell and Ronald Wright

Authors Deborah Campbell and Ronald Wright will join us for two compelling readings filled with drama and intrigue that take us to 15th Century Peru and 21st Century Syria.

Deborah Campbell is the author of A Disappearance in Damascus, which won the 2016 Hilary Weston Writers’ Trust Prize as well as the Hubert Evans BC Book Prize. The New York Times called the book “A searing and extraordinarily affecting account…[part] memoir, history and mystery story.” It has been optioned for film and TV. Her work has also appeared in Harper’s, the New York Times, The Economist, The Guardian, and Foreign Policy. She has won three National Magazine Awards, and in 2017 received the Freedom to Read Award from the Writers Union of Canada.

Ronald Wright is the author of ten books – history, fiction, and essays – published in sixteen languages and more than forty countries. His 2004 Massey Lectures, A Short History of Progress, won the Libris Award for Nonfiction Book of the Year and inspired Martin Scorsese’s documentary film Surviving Progress. Wright’s dystopian novel A Scientific Romance won Britain’s David Higham Prize for Fiction and was chosen a book of the year by the New York Times, the Globe & Mail, and the Sunday Times. His latest work is The Gold Eaters, a novel set during the Spanish invasion of Peru.

The reading takes place Friday, October 26, at the Shoal Centre in Sidney, 10030 Resthaven Drive, at 7 pm. (Doors open at 6:30)
Tickets for this popular event are $10 at Tanner’s Books or online http://www.sidneyliteraryfestival.ca/tickets/
All proceeds will support the 2019 Sidney Literary Festival.
Further information: http://www.sidneyliteraryfestival.ca