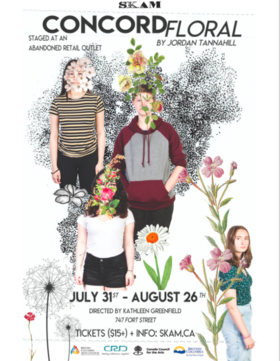 Visual Arts: Theatre:
Theatre SKAM presents the Vancouver Island premiere of the national hit, Concord Floral by Jordan Tannahill, in classic SKAM fashion: in an abandoned retail outlet. This site-specific production will feature two rotating casts of ten local Greater Victoria teens in a production that will remain in the minds of Victorians for years to come.

Concord Floral is a million square foot abandoned greenhouse and a hangout for neighbourhood kids. But something has happened there. Something nobody wants to talk about. Concord Floral re-imagines Giovanni Boccaccio’s medieval allegory The Decameron in a contemporary Canadian suburb, in which ten teens must flee a plague they have brought upon themselves. The play was written by Governor General Award-winning playwright Jordan Tannahill and originally created by Erin Brubacher, Cara Spooner and Jordan Tannahill with a cast of teenagers in Toronto.

SKAM.ca for tickets and info.