Production & promotion of live music events at a variety of ...
2560 Vista Bay Road, Victoria, BC Victoria BC
Open / Operational

A chance meeting at their local Black Fen Folk Club in Cambridge uncovered Hannah and Ben’s shared musical passions and sympathies, that over time has developed into a unique and intimate show of American roots and English folk music.

Huddled round a single microphone, singing intimate duets with just mountain dulcimer, dobro and guitar Hannah Sanders & Ben Savage are a folk duo from the UK that look & sound classically timeless, yet feel refreshingly unique. Fleetingly, they may evoke a memory of Gram & Emmylou, Shirley & Davey, or Gillian & David but their warm distilling of influences from both sides of the Atlantic produces a refined sound that is decidedly their own.

Their unique performances create a widescreen, cinematic soundscape with open spaces and atmosphere, giving their beautifully pure vocals room to share the songs’ emotion and narrative. The material is as joyful and fun as it is intense, but the common factor is the duo’s warmth and confidence in each other; their natural ease and connection is clearly evident on the recorded music, and a genuine pleasure to witness on stage. - www.hannahbenmusic.com

Qristina & Quinn Bachand are well known to local audiences! They have proven to be quintessential to Canada’s contribution to the world stage, garnering a mantle-packing collection of awards and recognition that thrust them to the top of the international Celtic music world. They’ve won two Irish Music Awards, 2010 Top Traditional Group and 2011 Top Duo. Since 2009 Qristina & Quinn have also received a combined total of 16 nominations at the Canadian Folk Music Awards, the Western Canadian Music Awards and the Vancouver Island Music Awards.

Born on Canada’s West Coast, with its signature embrace of experimentation and improvisation, Qristina & Quinn have developed their own ‘voice’, exploring various musical traditions, fusing styles such as Old-Time, Celtic, Folk and Jazz to create their own distinctive sound. While their performances speak to the heart of traditional roots music, they successfully introduce their own fresh new approach. They artfully meld heart-swelling, stomp and clap Celtic Roots with progressive Indie Folk, with results that are arresting, provocative, stimulating and thoroughly intoxicating.

Undoubtedly two of the most outstanding young musicians to emerge from Canada's West Coast, Qristina and Quinn have a musical bond that only siblings can share. With a musical connection reminiscent of other Canadian family groups such as Leahy, The Barra MacNeils and The Rankins, audiences everywhere are quickly falling in love with this powerhouse duo. - www.qbachand.com 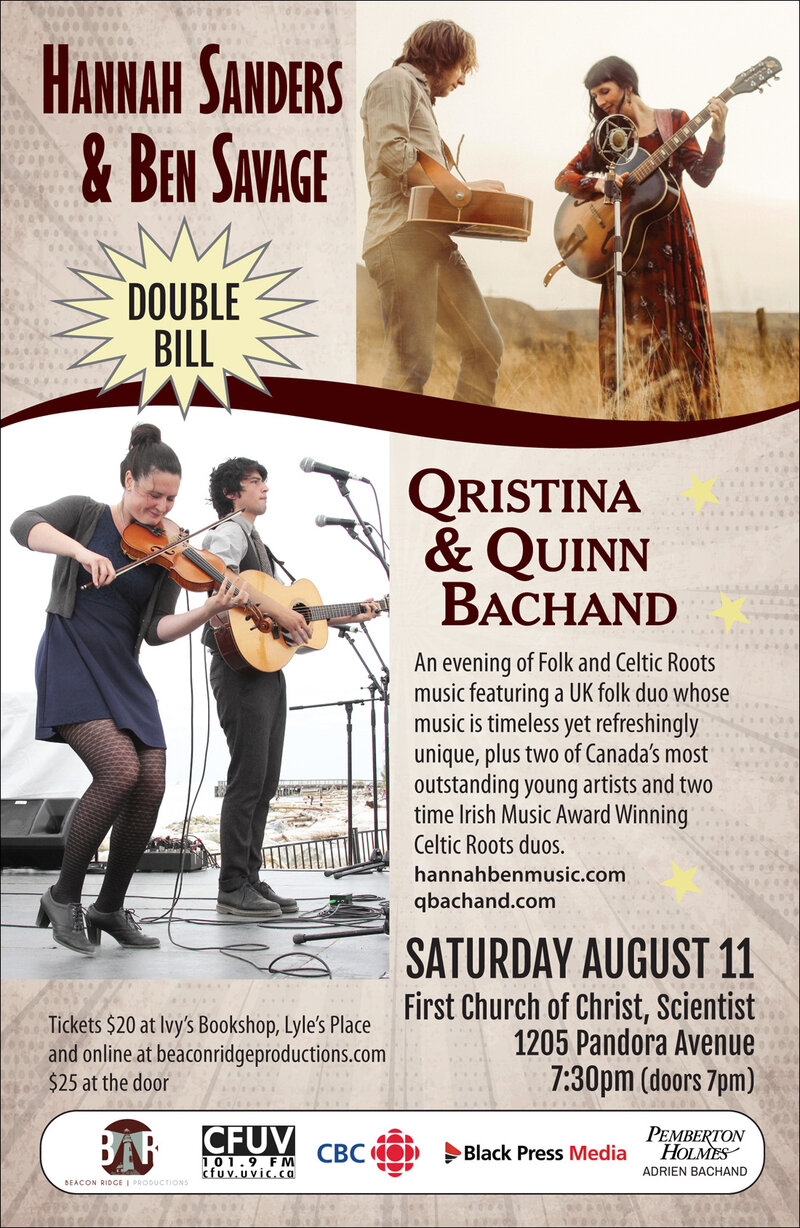