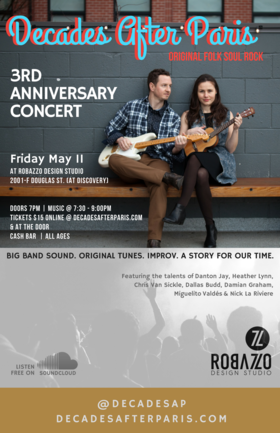 This will also be your chance to hear their new, unreleased song: "Trouble."

Set in present day, this big band rock song introduces a new character to the DAP story, and shares with the world a very Canadian approach to warning people about climate change...

Several Decades After Paris tunes will also be played with new flare, featuring new horn lines written by Nick La Riviere, and played by Nick and Miguelito Valdés at the live show.

You'll also hear some vintage Danton Jay, with Heather Lynn backing him up, and a few covers.

Tickets are $15 at the door and online: https://decadesafterparis.com/events

This is a licensed event with a cash bar; but you can also bring your kids!

Please cycle, walk, bus or carpool if you can. Parking is available along the streets.

CDs will be available for sale for $20.

Studio Robazzo is a multi-disciplinary design firm working to bridge the growing gap between the digital and physical realms.

Danton Jay and Heather Lynn are musicians and passionate change makers, from Victoria British Columbia. Combining their charismatic talents, they are creating intelligent, enjoyable and meaningful music. Do you like time travel? Their debut project is a climate action oriented, story concept album called “Decades After Paris.” The listen... more info
Articles: Send Us Your Climate Song for Paris!
Videos: 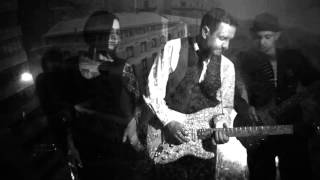