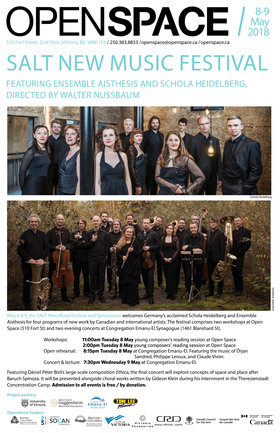 Music: Literary:
May 8 and 9, the SALT New Music Festival and Symposium welcomes Germany’s acclaimed Schola Heidelberg and Ensemble Aisthesis for four programs of new work by Canadian and international artists.

The KlangForum Heidelberg is where two very distinctive formations pool their interpretive élan and their astounding virtuosity: the voices of the Schola Heidelberg and the instrumentalists of the Ensemble Aesthesis. The two ensembles for contemporary and ancient music thrill their audiences all over Germany, at international festivals and as much-sought-after guests of major concert series. With its innovative concert formats, KlangForum Heidelberg has injected new life into the relationship between music and society. Conductor for the ensemble is Walter Nussbaum.

Wednesday 9 May
7:30pm — Concert and lecture at Congregration Emanu-El.

The final concert, featuring works of Dániel Péter Biró and Gideon Klein, will be presented by the Klangforum Heidelberg and Ensemble Aisthesis. This last year, Dániel Péter Biró has been composing a large-scale musical composition based on Baruch Spinoza’s philosophical work, Ethica. They will also perform a work written by Gideon Klein during his internment in the Theresienstadt Concentration Camp.

These events are presented in collaboration with the SALT New Music Festival and Symposium and Open Space. The festival is made possible through support from the John Simon Guggenheim Memorial Foundation, the Canada Council for the Arts, the BC Arts Council and the Goethe Institute.