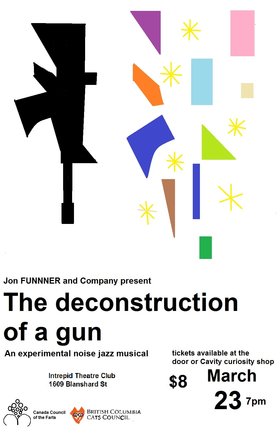 Event Archive - The deconstrution of a gun: an experimental noise jazz musical:

Theatre:
The deconstruction of a gun is an experimental musical where the main event throughout the show is the de-construcion of a gun made from hundreds of pieces of wood screwed together. Music will be played while spoken word and dance accelerate the improvised narrative that emerges from the tactile act of taking apart a representation of a gun. Once disassembled the audience and cast will re-create a new form using the same pieces originally used to create a representation of a firearm.

Tickets available at the door or Cavity Curiosity Shop