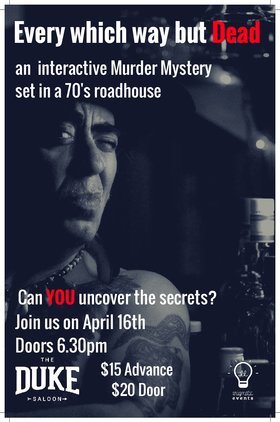 Event Archive - Every Which Way But Dead:

Theatre:
In 1978, The Duke Saloon was a roadhouse for locals and truckers. Offering cheap beer and country music, it hosted a mix of truckers, travellers and hard-working, blue collar locals. Perched on the outskirts of Victoria, it was known for it's no-nonsense attitude, especially from it's owner, Rusty McMullen. However, Rusty's not been seen for a few days, and his daughter Kitty is concerned he might have upset the wrong people...

"Every Which Way But Dead" is an interactive murder mystery, taking inspiration from "Smokey and the Bandit" and "Every Which Way But Loose". You'll meet some of the key characters and ask them the questions needed to find out the secrets of the Duke. Actors will be playing various roles. Mingle with them and other guests throughout the evening, follow your Sherlock Holmes instincts, and once the you've eliminated the impossible, the improbable must be the truth.

Come dressed for the era... but remember, in this sleepy backwater, Disco is one of them fancy city things... Doors open at 6.30pm, the introduction beginning at 7.00pm.

Feel Free to bring your own food, there's is no food service at the Duke. There is, of course, drinks. Duke Lager will be on at $5.75/pint.