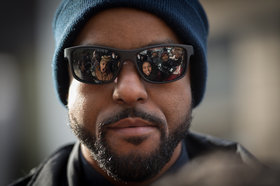 Film:
Great satire asks obvious questions that reveal uncomfortable truths. When it’s done well, it gets people talking. Cory Bowles’ formidable first feature has already added to the conversation regarding the abuse of police power and, in this particular story, how that power relates to race. An off-duty black police officer is pushed over the edge after experiencing a traumatic incident at the hands of the boys in blue. After years of upholding the law and being committed to the oaths he made, he hits a breaking point. He then spends a day treating white people with the same hostility that black civilians have endured in a racially oppressive system.As the black cop becomes increasingly consumed by his outrage, the ethical conundrum he faces is combined with the tension that things could get really out of hand.


Making effective use of body cams, dash cams and activist video from real protests, Bowles doesn’t shy away from connecting his stylized satirical drama to real-world events taking place across North America. Ronnie Rowe Jr. succeeds in making his character truly universal, confirming the wisdom of the decision by Bowles (who wrote as well as directed) to leave the character and the urban centre nameless. It is this omnipresence that makes the film so engaging. This could be anywhere. As a result, audiences can’t dismiss the morality of the issues by distancing themselves from their own culpability in it. This is a hard topic to tackle, but Black Cop is the bold confrontation we need.