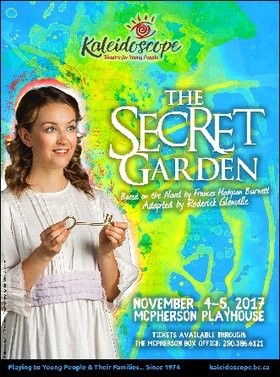 Theatre:
In 2014, Kaleidoscope Theatre for Young Audiences presented an original stage adaptation of Frances Hodgson Burnett’s classic children’s book, The Secret Garden. Written and directed by our Artistic Director, Roderick Glanville, our production of The Secret Garden premiered as a pop-up theatre at the Uptown Shopping Centre. Originally scheduled for four performances, it sold out so quickly that a fifth date had to be added to the schedule.

Now that we have returned to the McPherson Theatre for our 44th season, Kaleidoscope is reuniting nearly our entire cast to stage a fully-realized production. Join us for an evening dedicated to the healing power of love.

The Secret Garden takes place at the turn of the century, in an old manor home in England. After a cholera epidemic in India kills her parents and servants, Mary Lennox is sent to live with a reclusive uncle that she has never met, and his invalid son who never leaves the home. An angry and hurt 10-year-old girl, Mary’s life is changed forever when she finds a key to her uncle’s locked and overgrown garden. As she brings the garden back to life, Mary also connects with her uncle, his staff, and his son, bringing light and love back into their lives.

Tickets for The Secret Garden are on sale at the Royal McPherson Box Office.