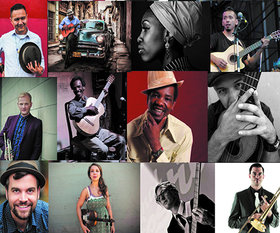 The project first began in the summer of 2015, when the artists were asked to come together to perform at the Vancouver Island Music Festival. After an intense week of rehearsals, the group made their first appearance on the mainstage of the festival. After their set, they were all elated with how it went, and decided one performance just wouldn’t be enough. A few weeks later, a plan was hatched to turn the one-off project into the province’s most exciting World Music band.

This is truly an exciting band with some impressive talent. Their performance is very much a collaboration that sees all the musicians playing with each other, and backing each other up as they sing their own songs and tell the stories of where they are from, and how they got to BC. They are the ideal festival band and take listeners on a worldwide journey without leaving the province.

Victoria fell in love with the Cuban-born Puentes Brothers many years ago, back when their first album was Juno nominated and won several other awards. The Puentes Brothers broke up nearly a decade ago, allowing Adonis Puentes to pursue his own musical vision. In 2005 this soulful and gifted singer released his first solo recording, Vida, and his m... more info

Celso Machado (Solo) There are few performers in the world today as versatile and fascinating as guitarist/singer/percussionist Celso Machado. Brazilian-born and Vancouver-based, Machado delights his audiences with his subtle mixture of musical inspiration, irresistible rhythm, and inspired lunacy. He is a highly respected multi-instrumentalist an... more info

No bio yet. more info

Best known as the front man for Vancouver’s The Paperboys, guitarist-vocalist (and Juno winner) Tom Landa has latterly been exploring his half-Mexican roots via a hot new Latin band named Locarno. The DNA of Locarno comes from a mixture of traditional Mexican and Cuban son, while the style combines elements of folk, pop, and all things Cuban. ... more info

Ostwelve, born Ronnie Dean Harris, is a Stō:lo/St'át'imc rapper and multimedia artist rocking from Vancouver, BC. Through an endless array of disciplines – rapper, radio host, community activist, actor, podcaster, graphic designer – Ostwelve has staked his claim as force of positivity and strength, a powerful representative of Indigenous cult... more info
Submit info on this show to our admins