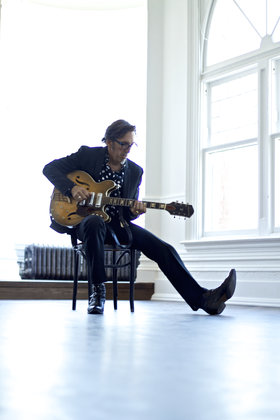 Music:
Touring in support of his ninth solo record, Every Soul's a Sailor, Stephen Fearing’s music is a mesmerizing blend of folk, roots, and pop. A founding member of Canadian roots-rock super-group Blackie and The Rodeo Kings, and winner of multiple JUNO and Canadian Folk Music awards, Fearing is a beguiling teller of tales and master guitarist. Having played to sell-out crowds and rave reviews during his 2017 tour in eastern Canada, The Netherlands, Germany, Scotland, and England, Stephen is kicking off 2018 closer to his Victoria, BC home with performances in BC and Alberta. The tour will be a unique experience for fans accustomed to seeing Fearing play solo as he will be accompanied by the rhythm section of bassist Rob Becker and drummer Leon Power. Becker is an award-winning touring and studio artist who has played with an elite group of musicians including Colin James, Barney Bentall, Patricia Conroy, The Sojourners, and Shari Ulrich. Based in BC, Power has toured extensively throughout North America, Europe, and Australia, with performances that span a variety of styles including folk, roots, country, pop, and gospel-soul.

Oh Susanna is the musical name of singer-songwriter Suzie Ungerleider. Performing since 1996, she has released eight critically acclaimed albums. She is the recipient of a Genie Award for Best Original Song and a Canadian Folk Music Award for English Songwriter of the Year. She has also been nominated for two Juno Awards each for Best Roots and Traditional Album of the Year, as well as two Canadian Folk Music Awards for Best Solo Performer and for Best Contemporary Singer of the Year. Her most recent recording, A Girl in Teen City, is an album of songs set in 1980s Vancouver starring a teenage punk girl named Suzie. Oh Susanna lives in Toronto with her husband and son.