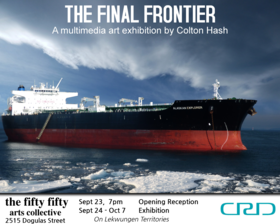 Thu. September 21st 2017 - Sun. October 8th 2017 @ the fifty fifty arts collective (All Ages)
*hours dependent upon volunteer availability* Our most current volunteer schedule can be found on the fifty fifty facebook page. Please feel free to email the collective to schedule a viewing appointment if you are visiting from out of town or have a tight schedule.
Opening: Thursday 21st September 2017
Thursday, September 21st at 7pm
By Donation

Visual Arts:
For centuries the Arctic has remained untapped as a petroleum frontier. As economic and diplomatic relations have deteriorated, development of the vast resource basins in the Arctic has intensified.

The Final Frontier is a multimedia installation presenting a future of increased militarization and industrialization in the Arctic. This body of work is installed in two separate spaces, a dark room containing two HD video projections with ambient sound, and a separate wall with prints of digital image compositions leading into the projection space. The Final Frontier is an experimental installation to represent a scenario that is on the precipice of becoming reality.

As an installation, The Final Frontier presents simple background elements of industrial structures that define the context of a potential future. This project leaves viewers to contemplate the presence of oil tankers and military vessels in the Arctic Ocean, the world’s final undeveloped petroleum frontier.

The content of The Final Frontier shows an absence of human life and culture, only relationships between marine vessels are present. Oil tankers may be seen as a literal manifestation of economic power and exchanges between importing and exporting nations. Military vessels can be similarly seen as representations of state power, present where there are strategic interests to protect, as well as claimed borders to maintain. In the future proposed by this installation, it is assumed that these elements of our world have dramatically increased and dominate what remains of political and economic interactions.

The footage and images of ocean vessels used as source material for this project were captured locally in Esquimalt and Port Angeles. This fictitious representation of oil tankers and military vessels in the Arctic presents a removed context, which subverts local biases of connection to the Salish Sea, where these elements currently exist in abundance.