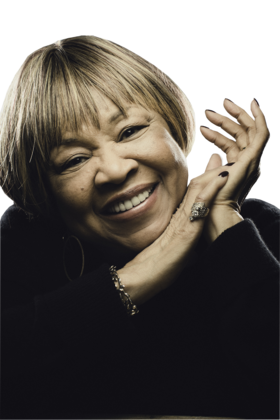 Music: Jazz / Blues
MAVIS STAPLES is living, breathing history. She is a Grammy-winning alchemist of American music, having continuously crossed genre lines like no musician since Ray Charles. From the Delta-inflected gospel sound she helped create as a member of The Staple Singers, to the freedom songs of the Civil Rights era, to pop radio stardom during the Stax era, to The Last Waltz, to serving as muse to both Bob Dylan and Prince at the peak of their careers, to 21st century collaborations with Van Morrison, Ry Cooder, Willie Nelson, Chuck D. and Jeff Tweedy, the one constant has been Mavis and her singular voice. Now in her seventh decade, the legendary Staples released her latest album “Livin on a High Note” in early 2016, and was recently recognized as a Kennedy Center Honoree.

The TD Canada Trust Vancouver International Jazz Festival brings you as part of the Telus Series Mavis Staples. Recently the winner of a Grammy Award for Lifetime Achievement, Mavis Staples is one of soul and gospel’s definitive voices. Most famous for her work with gospel pioneers the Staple Singers, her career also encompasses solo projects i... more info
Submit info on this show to our admins