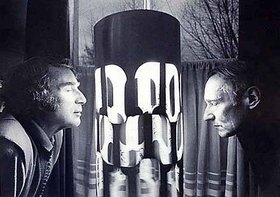 Visual Arts:
"The Dreamachine was conceived by artist, painter, writer and mystic Brion Gysin, along with his friend Iam Sommerville, in the early sixties. It is the first object in history designed to be viewed with closed eyes.

The Dreamachine simply consists of a cylinder with holes cut into its sides and placed on a turntable. A lightbulb is suspended in the center of the spinning cylinder, and the rotation lets the light pass through the holes at a constant frequency, situated between 8 and 13 pulses per second. This frequency range corresponds to the 'alpha waves', electrical oscillations naturally present in the human brain when the eyes are closed and no stimuli are processed, e.g., when there's a relaxed and effortless alertness, and while meditating.

The Dreamachine is viewed with the eyes closed: the flickering light stimulates the optical nerve and alters the brain's electrical oscillations, producing vivid visions of very bright moving and morphing colors in geometrical patterns to appear 'projected' behind the eyelids, covering completely the field of vision. A prolonged session in front of a Dreamachine can push the experience further, altering the perception of time and space and provoking a dream-like state."

- Ian Sommerville
excerpt from Flicker, published in Olympia no.2 (Paris, 1962)

"Had a transcendental storm of color visions today in the bus going to Marseilles.
We ran through a long avenue of trees and I close my eyes against the setting sun.
An overwhelming flood of intensely bright colors exploded behind my eyelids: a multi-dimensional kaleidoscope whirling out through space.
I was swept out of time.
I was out in a world of infinite number. The vision stopped abruptly as we left the trees.
Was that a vision? What happened to me?"

"We must storm the citadels of enlightenment, the means are at hand."

- William S. Burroughs, in a letter to Brion Gysin

"You are the artist when you approach a Dreamachine with your eyes closed. What the Dreamachine incites you to see is yours...your own. The brilliant interior visions you so suddenly see whirling around inside your head are produced by your own brain activity. These may not be your first glimpse of these dazzling lights and celestial colored images. Dreamachines provide them only just as long as you choose to look into them. What you are seeing is perhaps a broader vision than you may have had before of your own incalcuable treasure, the "jungian" sort of symbols which we share with all normally constituted humanity. From this storehouse, artists and artisans have drawn the elements of art down the ages. In the rapid flux of images, you will immediately recognize crosses, stars, haloes...woven patterns like pre-Columbian textiles and Islamic rugs...repetitive patterns on ceramic tile...in embroideries of all times...rapidly fluctuating serial images of abstract art...what look like endless expanses of fresh paint laid on a palette knife."