Anonymous suggestion left 9/24/06: *Linda Humphries was subsequently Linda McRae of Spirit of the West and then released solo work. From late 1981 to about mid 1983 when the band split, Jon McGrath replaced Karl Horrigan on guitar and vocals. I loved Easy Money! (totally biased, Karl Hourigan is my brother). He is still making original music... more info
Audio: It's So Strange "Live" @ Harpo's 1982, No Stranger To Danger 1981, Stop Messin' With My Heart 1982

Russ Dunaway was the first singer and in fact named the band. When it was started they rented a rehearsal spot on Fort St. above Kent Music 77-78. more info

Night Flight started in 1975 when 16-year-old drummer Barry Balshaw, of the Claremont area, answered an ad put up in a music store by 15-year-old guitarist Mike Woods and 17-year-old bassist Dale Hitchcox: two chums from the Gordon Head area. Within a year Hitchcox was replaced with Barry's friend, Sue Baim, a vocalist/bassist. A year later, Trevor... more info
Audio: In My Heart 1981, Close To You 1981, Band Rehearsal 1984 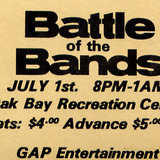 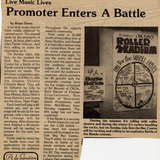