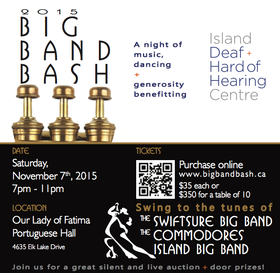 Music: Jazz / Blues
The 8th Annual Big Band Bash presented by McNeil Audiology, is being held in Victoria on November 7, 2015. The Big Bands that graciously donate their gift of music included: The Island Big Band, The Swiftsure Big Band, and The Commodores. Through ticket sales and an appealing silent auction, funds raised at the Big Band Bash support Island Deaf & Hard of Hearing Centre.

Swiftsure is a 17 piece band with vocalist that performs music of the swing-era (1930s & 40s), as well as more contemporary Latin and jive tunes.
To book or for further information about the band call Ricky at 250-857-8778 more info
Submit info on this show to our admins