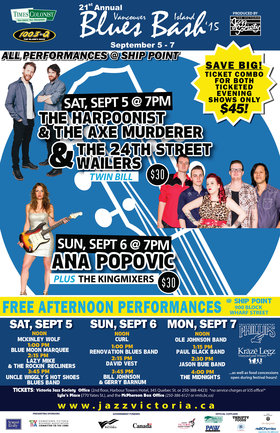 For the full schedule of the Free Afternoon Performance Series, visit: http://jazzvictoria.ca/blues-bash/page/schedule

Do not miss the festivals ticketed evening performances with The Harpoonist & The Axe Murderer, The 24th Street Wailers, and Ana Popovic. For more information visit: http://jazzvictoria.ca/ 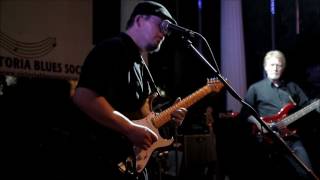 The Ole Johnson Band at V-Lounge: If Trouble Was Money (Gary...

Rolling like a freight train with no throttle control comes the blues sensation from Victoria, British Columbia, Paul Black. With captivating rhythms, dazzling lead guitars, and soulful vocal styles, Black is establishing himself as a true, straightforward, fearless blues rock and roller. If his energetic, throaty brand of music doesn’t have your... more info
Audio: Little Mary, Slippin Away

Jason Buie's six string manipulation is stunning and magical and his passion, honesty and charisma shine in his live shows. Jason's modern electric blues in seasoned funk, rock and soul with influences that originate in the Southern States and inner cities of America. more info

The Midnights are a group of professional musicians and students which provide mentoring and work experience for members of the Victoria High School R&B Band. This dynamic high energy show features three or more of Victoria's best up and coming singers with a finely polished presentation and superb choreography. The very best Motown and soul da... more info
Submit info on this show to our admins