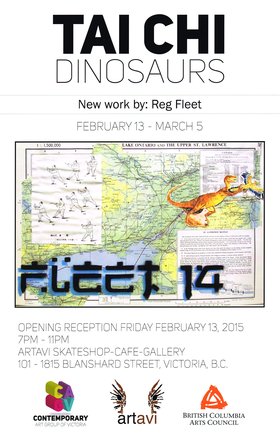 Fri. February 13th 2015 - Fri. March 6th 2015 @ Artavi Skateboards (All Ages)
9am to 6pm
Opening: Friday 13th February 2015
All are invited to join us on Friday, February 13th for the opening reception of 'Tai Chi Dinosaurs' by Reg Fleet. The doors will be open at 7pm.
Free
Presented by: Contemporary Art Group of Victoria, British Columbia Arts Council

Visual Arts:
Opening night of a three week long exhibition featuring the series of works entitled 'Tai Chi Dinosaurs' by Reg Fleet. Come on down, have a drink, and pick up some really cool artwork!

We're kicking things off at 7pm, so make sure to invite your friends along to kick off the weekend!

The Lookout
by  Logan Ford

Passing Through Too
by  Richard Michelle-Pentelbury