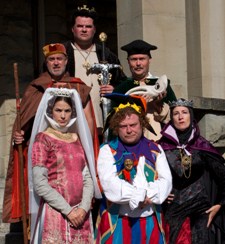 Theatre:
Sin City the Live Improvised Serial is now in its 4th spectacular season! Travel back in time to 14th Century Europe with KINGDOM OF THRONES. The action takes place in a medieval castle populated by peasants and ruled by royalty - evoking the fairytale world of 'Once Upon a Time', the dangerous intrigue of 'Game of Thrones', and the spontaneous silliness of 'Whose Line is it Anyway?'.

Every Sin City show is completely improvised and unrehearsed - and the story continues on Tuesdays for a total of 24 hilarious episodes. The quickest wits in Victoria are directed live by Ian Ferguson. Come for one night of laughs - each episode stands alone! If you get hooked, come back, you will be in good company.