152 West Hastings is an artist studio in the DTES, a neighborhood experiencing g...

152 West Hastings is an artist studio in the DTES, a neighborhood experiencing gentrification. The studio, located across from the new Woodward's development, is one of the last buildings on the block that has not been renovated. In an uncertain environment its young artists seek to carve out their space and persist in creating innovative artwork. They are friends of varying backgrounds and represent different schools of practice.

John Burgess is a multidisciplinary visual artist currently living in Vancouver. His focus has been on large scale installations, and recently a return to painting. Burgess has exhibited in Australia and Canada and finished his BFA at Emily Carr University 2008.

Jesse Corcoran, an artist from the DTES of Vancouver was initially influenced by graffiti artists and his friends. The adventure and exploration of the city fuels his continual need for expression. Branching out into more formal forms of art such as photography and drawing have since become a big part of his work but evidence of his root inspirations remain. In April Jesse's work will be showing in Victoria, Toronto and Finland as a part of various group shows.

Morag Kydd received her BFA in Painting and Drawing from Concordia University in Montreal QC and has exhibited her work in Canada and the U.S.. Morag makes lyrically intricate illustrations, strange landscape paintings and invented scenarios. Her photography practice explores the notion of home, noting strange debris and the sculptural events made accidentally by man and nature alike around her neighborhood.

Graham Landin is a self taught and largely intuitional artist. Graham's work is motivated by a desire to encounter something new. experimenting with concepts of space, inventing games and working towards fusing art and sports. he enjoys an odd conspiracy theory and loves to romanticize. He's a Virgo and he likes jokes. His work has been exhibited in Canada and the U.S..

Andrea Lukic is a Vancouver based artist and musician currently working in sculpture and collage. Her practice investigates particular projections of identity through various forms, from flags to frightwigs and packing materials to video. Andrea is presently finishing her BFA at the Emily Carr University.

Anna MacLellan creates curious collages and peculiar works of art. She acquires her art supplies from alleyways, garage sales, flea markets, friends and random people. She often enjoys challenging the social conditioning that tells us to look at but never touch artwork. Some pieces are interactive and the viewer who indulges their curiosity will be rewarded with something pretty neat. Anna grew up in Ottawa and the Pontiac, but now lives in Vancouver. She is happiest when she eats pie.

Ben Marvin moved to Vancouver in 2007 after being raised in Calgary, Alberta until the age of nineteen. With a focus on photography he is fascinated with a haunting depth found in the simplicity of portraiture. This fascination with simplicity and complexity in banal imagery is a theme throughout the rest of his work.

Les Ramsay is an artist based in Vancouver, Canada. His diverse studio practice incorporates painting, drawing, sculpture, collage, photography, and printmaking. He received a BFA in visual arts from the Emily Carr University, and also studied at the Universidad Politécnica de Valencia, Spain. His work has been exhibited in Canada, Spain, and the United States.

Alex Stusberg, aka "Teddy", is a self taught acrylic painter and illustrator. His paintings and drawings celebrate juvenile optimism and innocence, juxtaposed with the worries of an adult mind. Stursberg is influenced by tribal art from around the world, his friends and peers, and the cartoons and comics of his childhood.

Kara Uzelman, With an educational background based in urban planning, fine arts and archaeology, I have developed process based, site specific works, focused on the rehabilitation of the objects and artifacts of my surrounding environment. 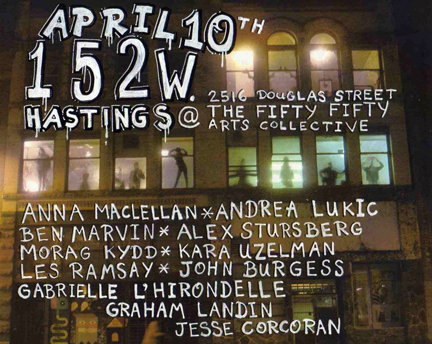