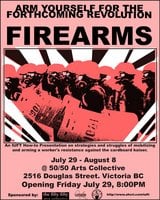 Visual Arts:
Who rules the world? Who has the utility belt? IUFT's first "formal" "art show" Firearms. This show will feature works by Chris Lin and Stephen Strutynski, whose works reflect their defiance against the secret chief of the world - the Cardboard Kaiser. Under the Kaiser's rule, goods will be mass produced and sent out into the world, infiltrating and exploiting our values - becoming invisible soldiers for the mind.
Opening night is Friday July 29th at 8:00PM.
Artists: Chris Lin, Stephen Strutynski