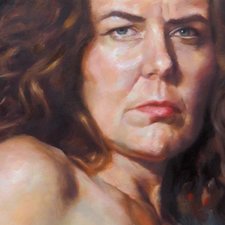 Nicole Sleeth is a figurative oil painter and art instructor. Trained in Ottawa and New York City, she works and teaches from her studio in Victoria, BC.

Nicole’s work centers the female figure as an exploration of power, connection, and lived experience.

Born in Kingston, ON, Nicole met art at an early age through her grandmother, who offered books about Emily Carr and Claude Monet. In encountering Bob Grant’s Fine Art Studio in Ottawa in 1998, Nicole discovered the atelier method of instruction, where she developed a love for the figurative work of the masters, producing intensive studies of Rembrandt, Velazquez, Vermeer, and others. In 2010, following the end of a gallery position in Vancouver, Nicole opened her own atelier to teach and paint full time only a year later.

The similarity of oil paint to flesh and a desire to focus exclusively on the figure drew Nicole to painting nudes. She recognized early, and then consistently, two core traits of the masters’ legacy: the lack of agency in representations of female nudes, and the lack of investment in the subjects’ real character. While male figures stared back from the canvas at their creator, female subjects frequently turned their gaze downward, literally rendering them objects, not subjects of looking. Men were accoutered with props of their strength and position, while women were encumbered with materials of devalued and involuntary work. Even clothing among men was styled to enhance physique and status while on women it tightened and diminished stature while hoisting suggestive exposure. Nicole privately committed to defy the very traditions she was enhancing through her exclusive focus on the female nude. The public evidence of this vision is in the paintings themselves.

Nicole’s work has won awards in the Annual International Representational Show by the Federation of Canadian Artists, Figureworks Ottawa, and the Sooke Fine Arts Show, and has been featured in Focus and Boulevard Magazine in Victoria, BC. She has continued her education by participating in workshops at the New York Academy of Art and the Whidbey Island Fine Art Studio, studying with Alyssa Monks, Christopher Pugliese, and Max Ginsburg, and still considers Monet to be one of her greatest influences.

Nicole’s practice, studio and teaching atelier is based in historic Chinatown in downtown Victoria, BC on the unceded Coast Salish Territory of the Lekwungen and W̱SÁNEĆ nations.