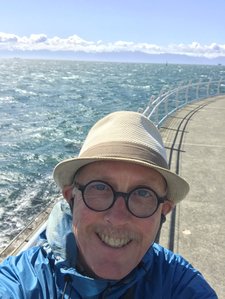 The Poet Laureate, also known as "the people's poet," is an honorary position that was established by Victoria City Council in June 2006 to honour and celebrate the contribution of literature and poetry in Victoria.

Victoria's Poet Laureate is required to produce a minimum of three new original works each year that reflect or represent ideas and issues of importance to the people of Victoria. The Poet Laureate also recites poems at City events, City Council meetings and official functions including the annual Victoria Book Prize Awards Gala. In addition, the Poet Laureate hosts a number of poetry events in the community each year.

Current Poet Laureate:
John Barton’s twenty-six books, chapbooks, and anthologies include For the Boy with the Eyes of the Virgin: Selected Poems, Polari, and Seminal: The Anthology of Canada’s Gay-Male Poets. A three-time recipient of the Archibald Lampman Award, he’s also won an Ottawa Book Award, a CBC Literary Award, and a National Magazine Award. Between 1989 and 2018 John edited Arc Poetry Magazine, Vernissage, and The Malahat Review. Since 1980, magazines, newspapers, and anthologies on four continents have published his poems, essays, and reviews. We Are Not Avatars: Essays, Memoirs, Manifestos, published this spring by Palimpsest, is his first book of prose. Also out this spring is The Essential Douglas LePan, which he edited for Porcupine’s Quill. Signal will publish Lost Family, a book of sonnets, in 2020. He lives in Victoria, where he is the city’s poet fifth and first male poet laureate.