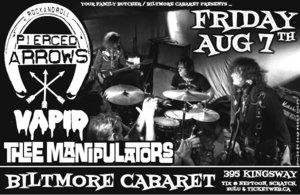 The morning after I first saw local 5 piece garage rock band Thee
Manipulators I woke up with two maracas in my bed and a lot more pins
on my jacket. Strangely, I had acquired a pin of an intoxicated/hungry looking fellow with creamers in his eyes and discreet text on the side saying “Mike Roche at Denny’s”
“You ended up getting one of those pins?! I never even got one”
exclaims lead singer Mike Roche over the phone..
“Alright were moving this interview to Denny’s! Just don’t get anything off the Rockstar menu, it’s almost as bad as the bands”

KV: All of you have had some success with past bands, Mike Roche (vox/guitar)& Mike Park (bass) are ex Gung Ho’s, Alex Angel (lead guitar) played with New Town Animals, Ben Frith (drums) played and toured Thor at the tender age of 18 while organist Henry Beckwith lends his talents playing around with local bands. With a background like that, how did Thee Manipulators form?

MR: After the New Town Animals and Gung Ho’s broke up the
Split Singles formed and Alex was played guitar. I joined and played one show with them opening up for The Leather Uppers and Mike Park
was there helping load gear. After the Gung Ho’s broke up we hadn’t
talked in a while but decided we still wanted to make music together. Split Singles didn’t last so the three of us got together to start Thee Manipulators about 2 years ago. Park hasn’t moved gear since!

KV: You’ve gone through a few drummers and organists before
sticking with Henry and Ben though..

MR: Yeah those two are third generation Manipulators. We went through two organists who both left and became doctors. That’s what happens when you go through our program, now we have Dr. Hankenstien!

KV: After two shows with your current line up you went straight into
Little Red Sounds Studio with Felix to record a full length LP..

AA: It’s called Ease Up on the Breakdowns put out by Neptoon Records..

KV: Why that title?

MR: All of our songs seemed to have too many breakdowns at
one point so I guess the name just evolved from that. We’re going to
have a limited number of LP’s and some CD’s . The album has 12 songs
on it and should be ready early fall so get your back-to-school
Manipulators albums. Also, we’re going to have Manipulators Ipods for a bargain at $300. It comes pre loaded with the album but you can’t put anything else on it.


KV: Any plans for tour after?

MR: Eventually, but for now we have some amazing shows with
great bands coming up in August. Mr. Quintron asked us to open up for
him at the Media Club (Aug 1st) which is great, one of my favourite
albums is 9 songs with Mr. Quintron. On August 7th we play with The
Pierced Arrows (ex underground legends Dead Moon) as well as some
dates in the States including the Summer Bummer festival (Portland) and at the end of September we’re playing with Monotonix from Tel Aviv, Israel at the Biltmore.

KV: Pierced Arrows are known to have some superstitions, do Thee
Manipulators have any?

MP: I won’t ever write out a set list, usually that’s
Henrys job but he always forgets and ends up running around looking
for a pen right before we go on. Henry doesn’t skateboard the day of
the show, he doesn’t know why..

KV: Thee Manipulators play radically entertaining live shows but the
last one you didn’t throw out any maracas to the audience..

MR: Listen, we’re in a recession here and everybody has to
make cut backs, beside at the last show someone stole the “Steal this
and Die” tambourine.

KV: I think when Michael Rault was pulled on stage with you to play ‘Sold!(your mine)’
Was the last time it was seen..

MR: well then, let this be known: Michael Rault, there is a price on your head!

KV: Henry, you broke away from your organ to go mobile with a Keytar
for one song. Will this become a more regular thing?

HB: I’m not sure. Last time a preset beat was hit during the
set and I had no idea, I couldn’t hear myself and just kept playing.
By the end of the song when everyone else stopped all you could hear
was a little electronic preset beat going off.

KV: Where did your stage attire evolve from?

MR: I kind of got the idea from a CCR Record where they are
all wearing bandanas and thought it looked cool. I think if you’re in
a band people should know it, stage outfits are a tradition not a
gimmick. People are going to shows to be entertained not see guys in a band t shirt and jeans stand around. It's like being at a wedding, you get dressed up and act like an asshole but at least you look good!

KV: Any Twilight fans showing up to the shows these days?

AA: It was crazy when we played with 100 Monkeys (featuring
an actor from the movie Twilight) at the Rio; we played to a full
audience of screaming girls! The next day we played the Cobalt on a
Monday, it was a little different. We played to 10 skids. Posted: Aug 5, 2009
In this Article Artist(s) Thee Manipulators