blue bridge at the roxy theatre

blue bridge at the roxy theatre (All Ages)

Damningly relevant in today’s uncertain times, fed-up workers’ wives refuse to pay inflated prices for groceries. In a nation of soaring food-bank use and persistent job insecurity, it’s not hard to imagine a run on the supermarkets, as people under strain are pushed to the brink.

Director David Ferry’s adaptation relocates the play to an early 1980’s Vancouver Island pulp and paper town. We Can’t Pay, We Won’t Pay! attacks a society in which parliaments work to sideline unions, corporate elites benefit from government industry incentives while avoiding tax and the workers at the bottom of the economic ladder choose between paying for food, fuel or housing.

The comedy of We Can’t Pay, We Won’t Pay is rooted in the slapstick of Commedia dell’Arte, featuring quick, sharp dialogue and outrageous farce that will leave the audience both thinking and laughing long after leaving the theatre.

blue bridge at the roxy theatre 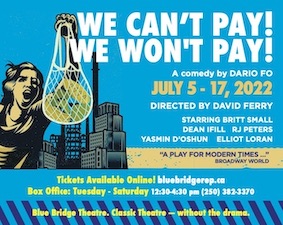