The Victoria Guitar Society is proud to present Drew Henderson in collaboration ...

Classical from Victoria BC
Available for Shows/Gigs

The Victoria Guitar Society is proud to present Drew Henderson in collaboration with the Victoria Conservatory of Music's Summer Intensive Program - Guitar. Drew will adjudicate a Masterclass at the beginning of the week and present a Recital to close the week of classical guitar studies.

Drew enjoys a multifaceted career in the arts as a performer, recording artist, music producer and teacher. After receiving his musical education at the University of Toronto where he earned a Master of Music degree in 2005 under Dr. Jeffrey McFadden, Drew travelled to Italy in 2007 to continue his studies with renown guitarists Lorenzo Micheli, and Matteo Mela. During this time, he was also heavily involved in the competition circuit, being awarded six prizes at international competitions. After his studies, he began performing professionally, and has concertized throughout Canada, the U.S., and Italy; bringing a program of both guitar favourites as well as his own unique arrangements. During one of Drew’s concerts, one can expect to hear a mix of evocative Spanish music, introspective Baroque masterpieces, and virtuosic selections from the Romantic era. In 2018-19, Drew’s performances include solo recitals at the Palazzo Nicolaco in Italy, the Cleveland Institute of Music, a workshop at the University School of Music in Lugano, Switzerland, and a performance of Rodrigo’s famous Concierto de Aranjuez with the Kingston Symphony Orchestra.

Drew also has a very popular classical guitar channel on YouTube, in which he performs and produces all the content himself. On this channel you can listen to over 50 performances of works he has adapted for the guitar by composers such as Bach, Paganini and Schubert; some of which feature an 8-string custom made guitar. Currently, Drew’s channel has over 30,000 subscribers, and has reached over 6 million views.

As a music producer, Drew is in high demand for both sound engineering and videography. He has worked with some of today’s leading guitarists to create full-length albums and videos. His recordings have appeared on several major labels, including Decca, Sony, Naxos and Analekta. This side of his career has taken Drew all over the globe; from North America, to Europe, and Asia.

For more information and registration for the recital and masterclass, please go to: www.victoriaguitarsociety.ca 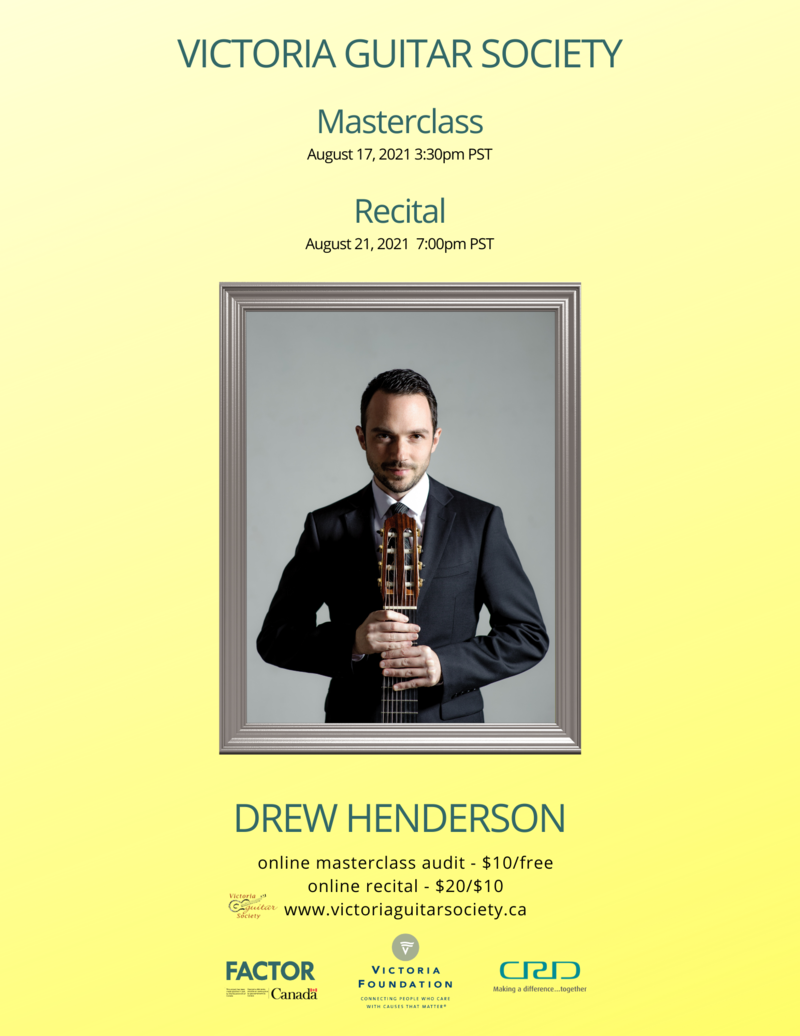