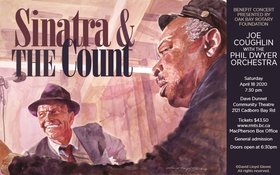 Music: Jazz / Blues
Sinatra and the Count at Dave Dunnet Community Theatre on April 18 is Joe's celebration of the great musical collaboration between Frank Sinatra and Count Basie Orchestra that was most famously captured on the critically-acclaimed 1966 recording, Sinatra at the Sands.

The Phil Dwyer Orchestra features Dwyer's Juno Award and Order of Canada-winning tenor sax with a who's who of Canadian jazz including veteran Edmonton-based fellow Juno Award and Order of Canada-winning alto saxophonist P.J. Perry, Vancouver band leader and guitarist Bill Coon, and Dr. Tony Genge playing Count Basie-inspired piano and organ. Ryan Oliver, Miguelito Valdez, Bruce Hurn, Patrick Boyle, Nick La Riviere, Ken Lister, Hans Verhoeven...almost everyone in the orchestra is a band leader, all are stars on the local jazz scene. It's an amazing big band that will do justice to Coughlin's jazz genius, and it will swing!

Joe Coughlin has an impressive voice that has taken him to North America’s finest clubs and on tour with legendary artists such as Dizzy Gillespie and Woody Herman. 2008 and 2009 National Jazz Award winner “Male Vocalist of the Year”, Joe keeps turning out great recordings (2009’s live Lowdown West Broadway is a treat). Once again appearin... more info

Bruce has been an active writer and performer of jazz both locally and internationally. He holds a Masters degree in music composition and theory, and has had a musical career spanning over 30 years. In Canada he has performed with artists such as Michael Buble, David Foster, Rob McConnell, Maria Schneider, The Glenn Miller Orchestra and The Tempt... more info

Singer-songwriter Nick La Riviere is an accomplished trombonist who tours internationally with bands such as the Juno award winning Paperboys, Michael Kaeshammer, 54-40, and Adonis Puentes. He's been a special guest with such bands as The Temptations, and Nikki Yanofsky. Drawing from his experience of playing shows of many different genres, Nick i... more info
Videos: