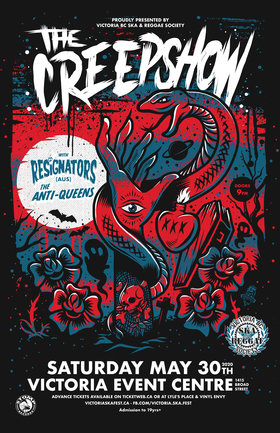 Music: Country / Bluegrass / Rockabilly, Folk / Celtic / Latin / World, Pop / Rock / Indie, Punk / Metal / Hardcore, Reggae / Ska / Dub
For anyone that likes punk, ska, psychobilly or just wants to dance and listen to good music, Victoria BC Ska & Reggae Society is proud to present Montreal's The Creepshow along with our good friends The Resignators from Australia and The Anti-Queens - an all female punk/rock group from Toronto!

It's been over three years since The Creepshow came to Victoria and now for the first time we are excited to present them. We already know The Resignators will give us an awesome show with their high energy ska and vintage rock. They have been long time friends of ours for years. If you haven't listened to them before you better gather your energy and get ready for some dancing because you're in for a sweaty affair!

Finally The Anti-Queens are an all female punk rock group who have been in the Toronto's punk scene for the past 10 years. Now the band is coming of age selling out venues in Eastern Canada. This burrito loving quartet have gathered rave reviews everywhere they've played including festivals such as Pouzza Fest and NXNE.

ZOMBIES! GHOULS! HAUNTED HOUSES AND TATTOOED PSYCHO GIRLS! Enter if you dare(!) into the world of Southern Ontario’s Horrorbilly sensation THE CREEPSHOW. A group whose fiendish mix of 1950’s influenced rockabilly, and punk rock energy will have you shaking your hips, singing along and quite possibly howling at the next full moon! From... more info