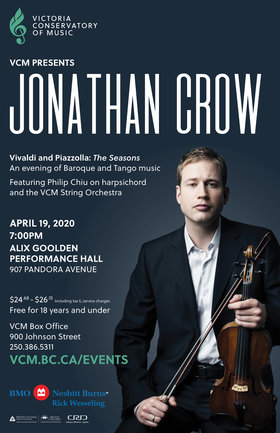 Music: Classical
Jonathan Crow, violin, will be performing Vivaldi’s Four Seasons and Piazzolla’s Cuatro Estaciones Porteñas in their entirety.
Celebrated pianist Philip Chiu will join Four Seasons on harpsichord.
Victoria Conservatory of Music Alumnus Jonathan Crow has been Concertmaster of the Toronto Symphony Orchestra since 2011. He earned his Bachelor of Music in Honours Performance from McGill University in 1998, at which time he joined the Orchestre symphonique de Montréal (OSM) as Associate Principal Second Violin. Between 2002 and 2006, Jonathan was the Concertmaster of the OSM; during this time, he was the youngest concertmaster of any major North American orchestra.
The Victoria Conservatory of Music is grateful for funding support for this concert from the Gail O’Riordan Fund for Music and Performing Arts through the Victoria Foundation. For more information about the fund, click here: https://victoriafoundation.bc.ca/gail-oriordan-memorial-fund-for-music-and-the-performing-arts/