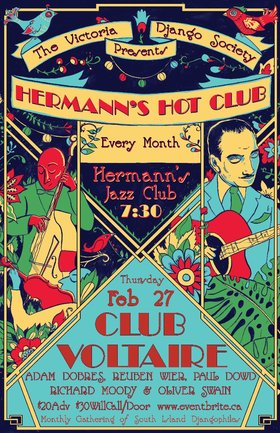 Music: Folk / Celtic / Latin / World
On the last Thursday of every month the roaring 20's are back with the best in Romani-French Swing.
The Victoria Django Festival is going to kick things off with Club Voltaire featuring Adam Dobres, Richard Moody, Oliver Swain, Reuben Weir and Paul Dowd.
This all-star lineup of JUNO and WCMA nominated artists are well known to Victoria audiences but only those lucky enough to attend The Victoria Django Festival have had the treat of seeing this group live. With a new recording on the way you might just be watching the birth of a legend.