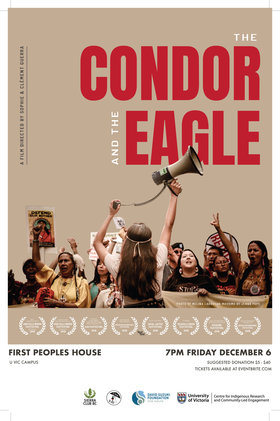 VICTORIA – The award-winning climate crisis documentary “The Condor and The Eagle” will have its Victoria premiere at the University of Victoria’s First Peoples House on Dec. 6, telling the story of four Indigenous leaders on an extraordinary trans-continental adventure from the Boreal forest deep into the heart of the Amazon to unite the peoples of North and South America.

· What: Victoria premiere of “The Condor and the Eagle” / launch of national Indigenous-led climate awakening campaign

While the Amazon burns, the global youth climate movement gains momentum and the United Nations warns us we have one decade to reduce emissions by half to avoid irreversible, catastrophic effects of the climate emergency, “The Condor and the Eagle” shows how we can follow Indigenous leadership to transition away from fossil fuel extraction into a sustainable future.

The Victoria premiere is part of a 10-stop Canadian tour, including an ambitious outreach campaign uniting North and South across Canada. The film is a climate-organizing tool that spotlights Indigenous women and Indigenous-led resistance – amplifying the voices of targeted communities – to catalyze critical intercultural dialogues, shift public opinion and coordinate actions to urgently reorient our way forward.

For more information or to arrange an (advance) interview, please contact:

Four Indigenous environmental leaders embark on an extraordinary trans-continental adventure from the Boreal forest to deep into the heart of the Amazonian jungle to unite the peoples of North and South America and deepen the meaning of “climate justice.”

Energy companies are actively planning to triple Canadian tar sands (world’s largest industrial project) production in the coming years, which would mean “game over” for climate change. Such an increase in production is possible if the planned pipelines are actually built and permitted in the US and Canada. Our four protagonists live alongside the pipeline routes. “The Condor & The Eagle” brings to light the major role played by Indigenous women in the build-up of the environmental justice movement.

Melina Laboucan-Massimo and Bryan Parras’s lands were devastated by the oil industry and it has remained an acceptable secret, with no coverage from the media, and limited support from their governments. Even as her people were dying in the Alberta tar sands, Melina’s sister was recently murdered: violence against the Earth, begets violence against women. This tragic event set into motion her quest for justice, which will lead her half way across the globe. Bryan has always lived in the energy capital of the world, Houston. He grew up uprooted from his Indigenous origins until the day he met with other Indigenous people who vowed to bring back respect for the land and ancient cultures. So begins his journey to rediscover his true self, the meaning of being Indigenous.

We follow our protagonists as they develop a resistance strategy that matches the level of their opponents – taking their effort to South America (main character is Patricia Gualinga from the community of Sarayaku), Europe and beyond. Their task is to make local battles an International concern and finally expose criminal corporations responsible for serious crimes.

While the Amazon rainforest has been on fire for many weeks, UN climate scientists are predicting unprecedented global catastrophe. "The Condor & The Eagle" features Indigenous leaders, from the global North and the global South deploying an unparalleled joint and coordinated global response. Facing this overwhelming current political climate, a great many people are looking for answers that are adapted to today’s urgency. Our film and campaign show tangible actions anybody can take, inviting white and privileged people to follow the call from Indigenous communities

Most of the film focuses on American energy hotspots that are the tar sands in Alberta and Houston industries. As fossil fuel developments get out of control (largest-ever open pit tar sands mine is quietly making its way through a government review – dramatic impacts of climate change on Houston and the Gulf), some of the most bio diverse places in South America are being sold to oil companies (Sarayaku, Sapara, Yasuni, Rio Tigre, etc.). The urgency is real and this film and campaign will make sure that these large-scale destructive projects are made public and lift up the voices of resistance from North and South America.

This film puts a public spotlight on Indigenous women leaders advocating for change towards a sustainable future and pushing for the enforcement of their rights. Unlike many environmental projects, ours does not preach to the choir but reaches out to new communities, targets white middle class regions (with no Indigenous knowledge) and opens up critical intercultural dialogues – all while using a “fun” approach and organizing festive events. Our work holds the potential to amplify their voices, educate and shift public opinion, mobilize new communities and coordinate urgent joint actions.

Melina grew up in northern Alberta, within the Canadian tar sands region, where she and her people lived traditionally off the land, until a devastating oil leak polluted the territory. The governing institutions turned a blind eye and in protest Melina began travelling the world to raise public awareness about the disastrous possible consequences of the tar sands mega projects and the existing and planned pipeline routes. Melina’s sister was recently murdered, and she believes that the loss of her sister and countless other women in indigenous communities are linked to the destruction of their land. “Violence against Mother Earth is violence against women, the two are inextricably linked” says Melina. She is seeking justice for her sister’s murderers and criminal corporations responsible of crimes of ecocide.

BRYAN PARRAS – The Organizer – East-Houston, Texas, USA – Stands against the refineries that aim to refine the tar sands if the KXL pipeline is permitted

Bryan Parras is one of the Gulf Coast's most dynamic social and environmental activists who is fighting for justice along the I-10 corridor, which spans the entire western continental United States. Bryan grew up in a fence line community on the East side of Houston, Texas near one of largest petrochemical plants in the south. He is deeply involved with the organization of marginalized communities to confront environmental racism in the sacrifice zones of Houston and the greater Gulf Coast region. After 15 years working for environmental justice, he started losing hope until the day he met with a young resident, Yudith Nieto. He took her under his wing, hoping that she will one day become a great environmental leader. Bryan is aware that modern lifestyle took him away from his Indigenous roots. He is committed to rediscover his roots by taking part in the rising Indigenous-lead environmental justice movement.

Casey of the Ponca Nation of Oklahoma, is a long-time native rights activist, and environmentalist who is at the forefront of many efforts to educate and empower both Native and non-Native communities on environmental and civil rights issues. She has embraced the role of First Nation’s spokesperson against the KXL pipeline that could link the Canadian tar sands with the state of Texas, passing through and endangering, the health of her inherent land. Casey’s life work has been to empower Indigenous women and effectively defend their communities against environmental / cultural destruction. She is at the source of the Indigenous Women’s Treaty, which lays the groundwork for an international women’s solidarity network.

YUDITH AZARETH NIETO - Queer Mexican-American artist, interpreter and organizer originally based in Houston, Texas, enjoying spending time in the bayous of Louisiana working on projects like CRY YOU ONE, Amor y Solidaridad a solidarity house in support of undocumented Transwomen, and recently BanchaLenguas a Language Justice interpreters collective.

Yudith has worked with frontline communities across the country to create, develop and amplify community-led media around just transition stories, artbuilds across the country in solidarity with intersectional movements for a decolonized direct action approach. She has collaborated on initiatives that focus on creating youth leadership and art in activism trainings to teach people about environmental issues that affect their communities through arts, media and cultural organizing.

Currently, she is part of the core leadership circle for Another Gulf Is Possible antiracist, decolonized, abolitionist frame and a youth organizer with Los Jardines Institute. For the previous 5 years, Yudith was advocating for environmental justice for the fenceline community of Manchester, Houston in collaboration with Texas Environmental Justice Advocacy Services (t.e.j.a.s) and last year was named one of Grist.org 50 Fixers of 2018.