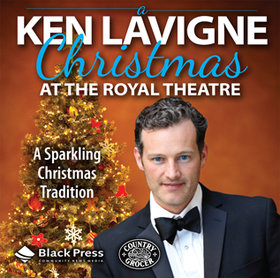 Singer Ken Lavigne has charmed his way into the hearts of concert goers across North America and beyond with his exciting blend of classical tenor sound and modern style. He was a founding member of The Canadian Tenors and co-founded the successful tenor trio, Romanza, which toured throughout Canada and the United States presenting hundreds of concerts. Over the past decade, Ken shifted his focus to independently producing solo performances and recordings that include nine albums: Believe, Keep Holding On, Showtime, Comfort & Joy, The Ken Lavigne Christmas Roadshow, Closer Than Ever, Let Me Be Frank and 3 Knights with a Tenor.

Ken was born and raised in Victoria and has attended the University of Victoria and the Victoria Conservatory of Music. He has recently returned from Tulsa where he has performed for his second season with Light Opera of Oklahoma. Prior to that he performed the winning song "Sempre Vicino" in the Tipperary International Song of Peace Contest in Ire... more info
Submit info on this show to our admins