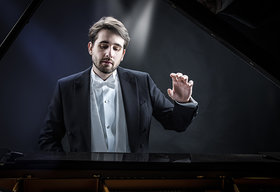 Born in 1981 in Lund, Sweden, Petersson began playing the piano at age 15. With an international performance career, he has appeared at venues such as Toronto’s Glenn Gould Studio, the Shanghai Oriental Art Center and the Kleinhans Music Hall in Buffalo, New York and has collaborated with orchestras including the Buffalo Philharmonic Orchestra, the Kraków Philharmonic and the Czech National Symphony Orchestra. Recordings include von Flotow piano concertos with the Pilsen Philharmonic on Sterling Records (2008), Godowsky’s Java Suite (2011), cello and piano duets of Offenbach and von Flotow (2012), a live recording of Grieg’s Piano Concerto at CBC Radio, and world premiere recordings by Per Nørgård (2016). In 2013 Petersson received his PhD from the Academy of Music in Kraków. As a lecturer, he has been invited as a guest speaker to the Royal Swedish Academy of Music, Tel Aviv University, the Hong Kong Academy for Performing Arts, the University of Ottawa and the New England Conservatory, among others.