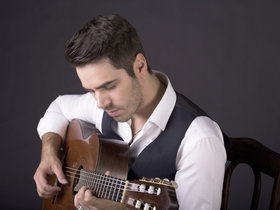 Music: Classical
"The Victoria Guitar Society presents Mak Grgic in the 2nd performance of its International Concert Series. Slovenian born Mak Grgic is emerging as a star on the worldwide stage. At the age of 22, Mak made his debut in Russia, performing Rodrigo's Concerto de Aranjuez with the St. Petersburg Symphony Orchestra. An expansive and adventurous repertoire attests to his versatility and wide-ranging interests: from the Baroque and Renaissance to music of the cinema; from ethnic music of his native Balkans to extreme avant-garde and microtonal music. Mak's extraordinary talents and tastes as soloist, collaborator, and recording artist are fueled by his curiosity, imagination, and boundless energy. In 2018 Mak was invited by legendary singer-songwriter k.d. lang to perform as the opening act for the North American leg of her Ingénue Redux Tour. Mak's recorded albums capture a probing and continuous exploration of the world of guitar and all its possibilities. His latest recordings, “Balkanisms“ for Naxos Music in collaboration with RTV Slovenija and “MAKrotonal” for MicroFest Records, explore ethnic music, microtonal, new music and early music on re-fretted instruments, such as a “zig-zag fretted Bach prototype guitar” that captures the temperaments of the Baroque period. Mak was one of the first students to apply for USC Thornton’s new Arts Leadership graduate program, which he incorporated into his doctoral studies in guitar. He has been a student of William Kanengiser and Scott Tennant of the Los Angeles Guitar Quartet, in addition to Brian Head, artistic director of Guitar Foundation of America. In the fall of 2017, he began the Artist Diploma program at USC, the first guitarist in the university’s history to be admitted to this elite program. For more information visit: http://www.victoriaguitarsociety.ca