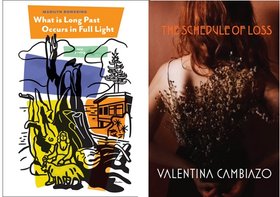 Literary: Poetry
Alessandra Naccarato is the recipient of the 2015 RBC Bronwen Wallace Award for Emerging Writers and the winner of the 2017 CBC Poetry Prize. Currently based in Toronto, she holds an MFA in Creative Writing from the University of British Columbia, and has toured nationally and internationally as a spoken word artist. Her debut poetry collection, Re-Origin of Species (Book*hug, 2019) combines personal narrative and natural study to tell a story of adaptation and evolution, and was featured in Fall Previews by CBC Books, 49th Parallel, and the Globe and Mail.

D.A. Lockhart is the author of The Gravel Lot that Was Montana, This City at the Crossroads, and Big Medicine Comes to Erie. His work has received multiple Pushcart Prize nominations. He is also the publisher at Urban Farmhouse Press. A Turtle Clan member of the Moravian of the Thames First Nation, Lockhart currently resides at Waawiiyaatanong on the south shore of the Detroit River (most often referred to as the border cities of Windsor ON and Detroit MI). Devil in the Woods is his fourth poetry collection.

The Planet Earth Poetry reading series is a launching pad for the energies of writers and poets established and not. Between 6:45 and 7:00, put your name in the hat to read at open mic. Planet Earth Poetry acknowledges with respect that we read and write on the traditional territories of the WSÁNEĆ (Saanich), Lkwungen (Songhees), Wyomilth (Esquimalt) peoples of the Coast Salish Nation.