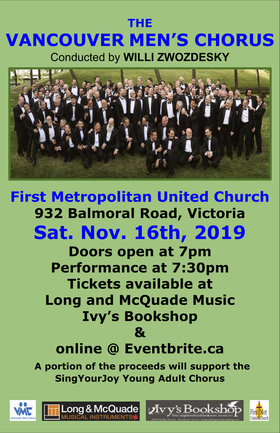 In 1981, the San Francisco Gay Men’s Chorus (the first gay choir), toured the United States and several men from Vancouver drove the three hours south to Seattle to hear them. On their return, they decided to start a chorus of their own performing their first concert in December of that same year. The Vancouver Men's Chorus officially became the first gay chorus in Canada, a founding member of GALA and the first international gay chorus in that organization.
Under the continuing direction of conductor Willi Zwozdesky, the chorus has achieved national prominence through performances across Canada including visits to Ottawa, Toronto, Calgary, Victoria, Edmonton, St. John's and Montreal, and through radio broadcasts on CBC.
Concert performances in the United States include San Francisco, Minneapolis, Seattle, Portland, Washington D.C., Denver, San Diego, and San Jose.
In addition, broadcasts of its 1995 recording Making Spirits Bright, the 1992 recording Signature and the 2006 release of Encore have increased national exposure.

The Vancouver Men's Chorus is a registered non-profit society dedicated to presenting high-quality musical entertainment. Comprised of gay men and their friends, the chorus promotes community spirit and a positive image of the gay community. more info
Submit info on this show to our admins